The inconvenient truth is that the earth's temperatures have flat-lined since 2001, despite growing concentrations of C02. Peer-reviewed research has debunked doomsday scenarios about the polar ice caps, hurricanes, malaria, extinctions, rising oceans. 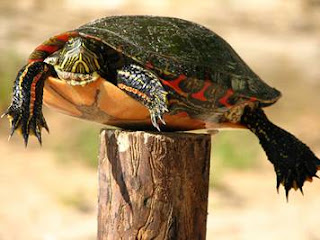 While suturing a cut on the hand of a 75-year old rancher, whose hand was caught in the gate while working cattle, the doctor struck up a conversation with the old man. Eventually the topic got around to politics and Obama as our president.

The old rancher said, "Well, ya know, Obama is a post turtle."

Not being familiar with the term, the doctor asked him, "What is a post turtle?"

The old rancher said, "When you're driving down a country road and you come across a fence post with a turtle balanced on top, that's a post turtle."

The old rancher saw the puzzled look on the doctor's face so he continued to explain. "You know he didn't get up there by himself, he doesn't belong up there, and he doesn't know what to do while he's up there, and you just wonder what kind of dumb #%! put him up there to begin with."
at June 30, 2009 1 comment:

What he means is, he wants to give jobs to some greenie friends while taking jobs away from anyone whose living may be affected by higher energy costs.

I used to think Jimmy Carter was the worst president in my lifetime.
at June 29, 2009 No comments:

In other words, he wants to punish people for being employers.

he also wants to add government-provided health care to the "marketplace" to provide competition to bring down costs of health care. Only a Marxist could believe that adding a government agency to the marketplace would promote competition. Obama's plan and his pubic statements demonstrate a profound ignorance of economics. Speaking as a graduate in economics myself, I know that economics operates according to immutable laws of human nature. The government cannot change those laws. Economics operates around the government's various laws, frequently with unintended consequences of government tinkering. The Soviet Union found that out with its massive black markets.

The United States Supreme Court has now issued its decision in RICCI ET AL. v. DESTEFANO ET AL., slip op. Overruling a Circuit Court of Appeals decision in which Supreme Court Justice candidate Sotomayor participated, the Court upheld a reverse discrimination claim by New Haven, Connecticut, firefighters who had passed a test for promotion, thrown out because too many whites and hispanics scored too highly. The City of New Haven, at great expense, hired a firm to prepare a test that would be race neutral. According to the evidence, the firm bent over backwards to make certain that the test would be race neutral, and purely job skills-based. They interviewed a disproportionate number of minority jobholders to make certain that the test questions would be race neutral. Still, all of the highest scorers on the test were white and hispanic. Firefighters who passed the test testified to the great sums of money and time they invested in preparation for the test.

In a 5-4 decision, a majority of the Supreme Court held that-disparate impact of a test that was objectively race neutral and prepared subjectively intended to be race neutral could not be arbitrarily thrown out.

While others have blogged about the irony of the "wise Latina woman" getting reversed in this high profile case, I was struck by the horror story of racial politics told by Justice Alito in his concurring opinion. According to him, a certain prominent local race baiter named Reverend Boise Kimber exerted strong influence with the mayor of the city of New Haven to get the test thrown out.

With all of this "hope and change," how can we expect racial politics to come to any sort of end?
at June 29, 2009 No comments:

Email ThisBlogThis!Share to TwitterShare to FacebookShare to Pinterest
Labels: Race

Eric Holder's Department of Justice will sponsor a booth at an event run by the Islamic Society of North America, an unindicted co-conspirator on terrorist funding in the Holy Land Foundation criminal prosecution, according to hotair.com.

It was the Department of Justice that named them as an unindicted co-conspirator. Is he out of his mind? Is it now DoJ policy to support suspected criminals?
at June 23, 2009 No comments:

As I listen to President Obama's tepid response to the cruel murders of protesters in Iran, which brings back memories of Tianamin Square, I realize something subtle, or maybe not so subtle, that bothers me about him. When he speaks about America, he lacks any sense of passion for America, for liberty, for freedom from tyranny. Listen to John F. Kennedy when he said in his inaugural address: "Let every nation know, whether it wishes us well or ill, that we shall pay any price, bear any burden, meet any hardship, support any friend, oppose any foe, in order to assure the survival and the success of liberty."

Contrast that with Obama's statement on the Iranian election:

More news of getting rid of folkis whose job it is to rrot out federal government corruption:

The firing of Gerald Walpin as Inspector General was not an isolated incident, as the Chicago Tribune reports today. Two more IGs have been dismissed in the past two weeks, and Senator Charles Grassley has started demanding answers. The sudden push to rid the government of independent watchdogs appears to coincide with Barack Obama’s plans to use government spending to get control over more aspects of American life....

Obama is developing a pattern of interfering with the independence of Inspector Generals. Read it all.
at June 18, 2009 No comments:

The New York Times files its brief arguing on behalf of the Obama administration, of course, but dutifully (and probably reluctantly) reports the reason that the firing appears to be corrupt.
at June 18, 2009 No comments:

More on the firing of to cover up Obama's corrupt friends. Obama now says Mr. Wilkes was confused in a meeting and other trumped up nonsense.

Let’s unwind the timeline a bit to test this new allegation. Walpin pressed hard to prosecute Sacramento mayor Kevin Johnson for defrauding the government over more than $400,000 in community service grants. Johnson, an Obama supporter, got a deal from the White House that allowed him to manage federal funds again and avoid paying back at least half of the grant money he used illegally. The White House cut Walpin out of those negotiations, and Walpin went to Congress about it.

At that point, the White House called Walpin and told him he had an hour to resign or be fired. Now, if the White House thought that Walpin was somehow incapacitated or disoriented, why bother to make that call at all? In fact, wouldn’t an employer with an ounce of empathy send the employee to a physician for diagnosis first? Even without the empathy, the proper course would have been to address the issue with Congress first instead of making an intimidation attempt to someone the White House now paints as all but senile.

This is nothing more than a bare-knuckled smear job, a despicable attempt to use allegations of mental illness to discredit someone who ran afoul of Barack Obama for taking the independence of his job seriously. That may play in Chicago, and it used to play in Moscow, but it shouldn’t play in Washington DC and America.

“The White House has failed to follow the proper procedure in notifying Congress as to the removal of the Inspector General for the Corporation for National and Community Service. The legislation which was passed last year requires that the president give a reason for the removal. ‘Loss of confidence’ is not a sufficient reason. I’m hopeful the White House will provide a more substantive rationale, in writing, as quickly as possible,” McCaskill said.

They can’t provide the real reason, which is that Walpin went after a political ally of the President’s. That’s why they’re calling him senile instead. Let’s hope that a few more Democrats with principle stand up to the White House’s bullying and politicization of the Inspectors General.

Update: The IG was objecting to a settlement agreement between Obama buddy Kevin Johnson and the United States Attorney in which Kevin Johnson would repay less than the full amount stolen (uh, misused). Now the Attorney General is investigating allegations that emails were deleted as part of a cover up of the stolen (misused) money. Read it all.

More on this and Mr. Walpin's response in detail from the Washington Examiner.
at June 17, 2009 No comments:

Now he wants the power to nationalize companies according to the Los Angeles Times.

Does anyone in Congress have the courage and savvy to stop it?
at June 16, 2009 No comments:

Mark Steyn makes the point: Obama says he wants to reform health care to control costs. The only way to control costs is to have less of it. Read it all.
at June 15, 2009 No comments:

The Obama White House has fired an Inspector General investigating corruption by one of Obama's friends. Gerald Walpin an inspector general who has prosecuted corrupt Republicans and Democrats alike has been fired. Under a law supported by then Senator Obama, an administration could not fire an inspector general without giving Congress 30 days notice and the reasons for the firing. Obama's reason given: He says he is no longer comfortable with Mr. Walpin. Not comfortable? That is a reason? Read about it here.

This should be a serious corruption scandal in and of itself. Will the MSM cover it? Will Congress Corrupticrats investigate? Don't hold our breath.
at June 15, 2009 No comments:

Another case of guns fighting crime. Would be victim shoots teen robber who was holding a shotgun on the victim.
at June 11, 2009 No comments:

Marxism coming our way at a gallop, socialism first though:

The Obama administration says executive compensation must be better managed to prevent the sort of risk-taking that jeopardizes the economy.

Apparently this notion of government managing private business is coming, this time, from an advisor to tax cheat Treasury Secretary Timothy Geitner.
at June 11, 2009 No comments:

Not surprisingly, the Obama porkulous bill has failed to get the unemploymenbt rate under control. Typical of liberal solutions to ecomonic problems, the porkulous bill is making things worse.

What is stunning is the speed at which the unemployment rate is increasing.