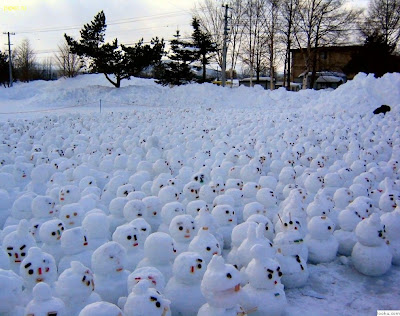 Drunk? Or on Drugs? You Decide.

The Senate Health Care travesty is bad enough, But to think that it was the product of inebriation .... Why should be we be surprised?
at December 28, 2009 No comments:

"Sticky Fingers" Stoddard, the Maricopa County, Arizona, courtroom deputy who brazenly lifted papers from a defense attorney's file is out of jail pending appeal. In the meantime, Sheriff Joe Arpaio has filed criminal charges ... against the judge who incarcerated the sticky-fingered deputy. It is reported that the prosecutor acting with Sheriff Joe had a hard time justifying the charges in a press conference, apparently acknowledging that there is no actual evidence that the judge he charged as done anything wrong (at least according to the New Times reporter). Read about the criminal charges and press conference here.

Here is a comparison of the Senate bill and the House bill both of which promise to destroy health care freedom in the United States.
at December 25, 2009 No comments:

Coal in the Stocking

The Senate passed the health care disaster last night to destroy health care freedom in America. All Democrats and independents in the Senate voted in favor and all Republicans voted against it.

As for the Democrats and independents: Defeat Them. All.

The Ant and the Grasshopper (The Age of Obama Version)

The ant works hard in the withering heat and the rain all summer long, building his house and laying up supplies for the winter.

The grasshopper thinks the ant is a fool and laughs and dances and plays the summer away.

Come winter, the shivering grasshopper calls a press conference and demands to know why the ant should be allowed to be warm and well-fed while he is cold and starving.

CBS, NBC, ABC and CNN show up to provide pictures of the shivering grasshopper next to a video of the ant in his comfortable home with a table filled with food. America is stunned by the sharp contrast. How can this be, that in a country of such wealth, this poor grasshopper is allowed to suffer so? Kermit the Frog appears on Oprah with the grasshopper, and everybody cries when they sing,“It’s Not Easy Being Green.”

ACORN stages a demonstration in front of the ant’s house where the news stations film the group singing,“We Shall Overcome.” Then the Rev. Jeremiah Wright has the group kneel down to pray to God for the grasshopper’s sake.

President Obama condemns the ant and blames President Bush, President Reagan, Christopher Columbus, and the Pope for the grasshopper’s plight. Nancy Pelosi & Harry Reid exclaim in an interview with Larry King that the ant has gotten rich off the back of the grasshopper, and both call for an immediate tax hike on the ant to make him pay his fair share. Finally, the EEOC drafts the Economic Equity & Anti-Grasshopper Act retroactive to the beginning of the summer.

The ant is fined for failing to hire a proportionate number of green bugs and, having nothing left to pay his retroactive taxes, his home is confiscated by the Government Green Czar and given to the grasshopper. The story ends as we see the grasshopper and his free-loading friends finishing up the last bits of the ant’s food while the government house he is in, which, as you recall, just happens to be the ant’s old house, crumbles around them because the grasshopper doesn’t maintain it. The ant has disappeared in the snow, never to be seen again.

The grasshopper is found dead in a drug-related incident, and the house, now abandoned, is taken over by a gang of spiders who terrorize the ramshackle (once prosperous and peaceful) neighborhood. The entire country collapses bringing the rest of the free world with it.

(Stolen from Columbus Dispatch comments on the Senate's Obamacare passage.)
at December 24, 2009 No comments:

It turns out that the death panel is back in Harry Reid's cash-for-corruptocrats health care bill. It is called: "Independent Payment Advisory Board."

The latest flap is about trying to make this death panel's decision unreviewable as a practical matter. Sen. Harry Reid proposes to require a super-majority vote to review any board decision on rationing health care.

The problem is that even if the deals are "legal" and do not violate written rules of ethics, they are still unethical and immoral from the good government sense.

Sherrod Brown remains silent on cash-for-cloture deals. Maybe he can't figure out what is going on. He really does not seem too swift.

For a recent column on the corrupt deals, read Michelle Malkin.

Update: There are eight attorneys general investigating the unethical deals.
at December 23, 2009 No comments:

Of course isolated cold weather does not tell the whole story. But how dumb do you have to be to still believe in global warming after 11 straight years of global cooling?

Update: Interestingly, the Climategate emails actually discuss this problem. The so-called scientists are baffled by that fact that their theories cannot account for the reality of falling temperatures. Their solution seems to be to find a way to make the data fit their theories, rather than the other way around (which would be the true scientific approach).
at December 23, 2009 No comments:

Here is the reaction to President Obama's Copenhagen speech fresh from the U.K.

If there were not $45trillion of Western citizens’ money at stake, this would be the funniest moment in world history. What a bunch of buffoons. Not since Neville Chamberlain tugged a Claridge’s luncheon bill from his pocket and flourished it on the steps of the aircraft that brought him back from Munich has a worthless scrap of paper been so audaciously hyped. There was one good moment at Copenhagen, though: some seriously professional truncheon work by Danish Plod on the smellies. Otherwise, this event is strictly for Hans Christian Andersen.

Read it all in the U.K. Guardian

Ohioans have a very poor Democratic Senator, Senator Sherrod Brown. As far as I have been able to tell, he has never had a real (i.e., non-government) job in his life. There is a Sherrod Brown FAQ at a blog called "Dump that Moron Sherrod Brown."

Let us hope he gets defeated at the next opportunity. He is so far left, that on all public policy issues, he is beyond reasoning with. He is a complete statist. He is bad news.

Frankly, I get the impression that he is not very bright, either.
at December 16, 2009 2 comments:

The more I read about Climategate, the more obvious it becomes that the so-called scientists involved in creating the global warming hysteria have behaved in some very anti-scientific ways. Sometimes science can prove something that turns out, after further analysis and review (for which the original raw data is VITAL), to be seriously mistaken.

Scientific facts are not determined by consensus, but by rigorous critical analysis after serious study. Climategate has exposed the raw nerve of scientist grand-standing. There is an excellent analysis of the state of the ever evolving Climategate scandal at the Weekly Standard.

Every Climategate denier should read it.
at December 12, 2009 No comments:

The War On Christmas

I was forwarded this Muslim-written blog piece about the politically-correct crowd's war on Christmas. A sample:

I believe that replacing “Merry Christmas” with “Happy holidays” is an attack on Christianity for the simple reason that it is. First, you ignore the fact that there are a billion Christians and over a billion Muslims on this planet earth who observe this holiday. Secondly, you are simply disrespecting those whose teachings and values you don‘t like. Haven’t you heard the phrase “Jesus is the reason for the season”?

It is good to see that the politically correct attack on Christmas is obvious to those of other religions.

Email ThisBlogThis!Share to TwitterShare to FacebookShare to Pinterest
Labels: Christmas

Global warming religionists have become fond of the claim that there are no peer reviewed scientific studies questioning global warming. That is false.

Here is a list of 450 critical peer-reviewed studies critical of man made global warming.

A Day That Will Live in Infamy

Moron of the Day: Barbara Boxer

Barbara Boxer is a woman with the ugliest pubic personality of any politician in recent memory, including her berating of a military man who called her "Ma'am" rather than "Senator." She has an ego that just will not quit. As an examplar of a global warming religionist, she wants to kill the messenger, calling "climategate" awkwardly phrased, "e-mail-theft-gate."

The theory seems to be that global warming is not a fraud unless the damning evidence is legally obtained.

What a dunce. And we have California to blame for her. And Nancy Pelosi. And Maxine Waters. Is there something in the water there the breeds mental instability?
at December 07, 2009 1 comment:

Email ThisBlogThis!Share to TwitterShare to FacebookShare to Pinterest
Labels: Global Warming, Moron of the Day

Houston braces for its earliest snowfall ever.
at December 04, 2009 No comments:

On November 6, I reported on the Maricopa County courtroom deputy who violated the trust we lawyers have in courtroom personnel when he snooped in a criminal defense lawyer's file. After a hearing, the deputy was held in contempt and ordered to jail unless he purged the contempt by holding a press conference and apologizing for his actions.

He held the press conference all right, but refused to apologize.

Contrary to the statements of Deputy Stoddard's union brothers, Deputy Stoddard's actions were reprehensible and unlawful. There appears to be a stand-off brewing in Phoenix. The administrative judge needs to address Sheriff Arpaio and tell him in no uncertain terms what sort of conduct is acceptable in the Maricopa County courtrooms.
at December 03, 2009 No comments:

For the Climategate Deniers

In an obvious fit of woke delusional lunacy, the state of Washington has eliminated the word marijuana from the state codes on the grounds ...