From a Mark Steyn comment on the NRO site,

A New Hampshire neighbor of mine had the misfortune to attract the attention of federal prosecutors for one of those white-collar “crimes” no one can explain in English. The jury acquitted him in a couple of hours. Great news! The system worked! Not really. By then, the feds had spent a half-decade demolishing his life, exhausting his savings, wrecking his marriage, and driving him to attempt suicide. He’s not a big scary businessman like Conrad, just a small-town nobody. And he’ll never get his life back. Because, regardless of the verdict, the process is the punishment — which is the hallmark of unjust justice systems around the world.

Mr. Steyn nails a major defect in the American justice system. Best in the world, maybe .. maybe not. I have not studied all other justice systems.

Juries are unpredictable, but I have seen juries fail to give the benefit of reasonable doubt. After all, the police would not have charged the defendant if he weren't guilty, they seem to think.

Police have the power to continue questioning the innocent (who do not exercise their rights to remain silent or to counsel (because, being innocent, they have nothing to fear, do they), until exhausted and under pressure they falsely confess. It happens more often than one would think.

For more information on how to conduct yourself when dealing with police, see the videos here and here.
at June 27, 2011 No comments:

Why Not Raise Taxes?

Sarah Palin Too Dumb to Be President?

Stupid Style, But Not Indecent Exposure

The baggy pants style is reaaly, really stupid. The style comes from prisons, where "bitches" advertised their availability, showing their underwear covered butts.

Indecent exposure? That requires a review of the statute or ordinance, but the dumb style does not normally include the exposure of actual genitalia (and probably did not in this case).

The Democrats are losing their Weiner. He is announcing his resignation from Congress this afternoon.
at June 16, 2011 No comments:


You cannot bring about prosperity by discouraging thrift.

You cannot strengthen the weak by weakening the strong.

You cannot help little men by tearing down big men.

You cannot lift the wage earner by pulling down the wage payer.

You cannot help the poor by destroying the rich.

You cannot further the brotherhood of man by inciting class hatred.

You cannot keep out of trouble by spending more than you earn.

You cannot build character and courage by destroying men's initiative and independence.

And you cannot help men permanently by doing for them what they can and should do for themselves.

Are any of the president's people listening?
at June 15, 2011 No comments:

Republicans Not Giving Light Bulbs Back

I am going to link to a column at Biggovernment.com that I wish I had written about the sad failure of Republicans to correct the light bulb disaster, uh, incandescent bulb ban, forcing all of us to use dangerous CFL bulbs. If you don't understand that they are dangerous, you have not checked the USEPA web site on how to clean up after a broken CFL bulb.
at June 14, 2011 No comments:

I was Feeling Guilty....

I was feeling guilty about missing last night's televised "debate" (mutual press conference is more like it) of the Republican candidates (well, not all of them), but after Ed Morrisey's review I realize I really did not miss much.

The biggest losers at last night’s CNN debate were the people who tuned in for political enlightenment, and ended up watching a two-hour game show. CNN’s moderator, John King, had me thinking of Rudyard Kipling and “good old grinnin’, gruntin’ Gunga Din” — but without the ironic redemption. Any political insight got lost in King’s continuous “uh uh uh uh uh” soundtrack that kicked in within seconds of a Republican attempting to speak. Not that there was much insight to be had in a format that insisted on asking “This or That?” questions, such as “Thin crust or deep dish?”

President Obama seems determined to prove that he knows absolutely nothing about economics, except the economic theories espoused by Marx (Karl, not Groucho). From Fox Nation:

President Obama explained to NBC News that the reason companies aren't hiring are not because of his policies, it's because the economy is so automated. ... "There are some structural issues with our economy where a lot of businesses have learned to become much more efficient with a lot fewer workers. You see it when you go to a bank and you use an ATM, you don't go to a bank teller, or you go to the airport and you're using a kiosk instead of checking in at the gate."

This is the same, sad Luddite opinion that prevailed in the days of Franklin Roosevelt and before and which has been wholly discredited by the booms of the 1960's, 1980's, and 1990's and the first half of the 2000's, all the while that we were becoming more and more automated.

It is no surprise that our president is an economic dunce.

The government is a cause of our serious unemployment problems, through excessive regulation and taxation. We need to eliminate most of the government agencies that now exist, and go back to the basics.
at June 14, 2011 No comments:

Moron of the Day: Debbie Wasserman-Schultz (D-FL and DNC Chairman)

Debbie Wasserman-Schultz is as fuzzy-headed as they come, literally and figuratively:

Visit msnbc.com for breaking news, world news, and news about the economy

Congratulations to today's Moron of the Day, second time winner, fuzz-head Debbie Wasserman-Schultz who brags that President Obama has turned this economy around.
at June 13, 2011 No comments:

Email ThisBlogThis!Share to TwitterShare to FacebookShare to Pinterest
Labels: Economy, Moron of the Day, Wasserman-Schultz

"Sadly, the Internet is the predator's venue of choice today. We need to update our strategies and our laws to stop these offenders who are a mere click away from our children." --Rep. Anthony Weiner in 2007
at June 10, 2011 No comments:

Should America Stop Throwing Taxpayer Money Down the Hole?

A serious report from The Onion, that unfortunately, gets it about right:

Email ThisBlogThis!Share to TwitterShare to FacebookShare to Pinterest
Labels: Humor

I guess I am not alone in my feelings about this person.

I would only add that someone needs to introduce Debbie Downer to a comb.
at June 09, 2011 No comments:

To end unemployment, first you have to create unemployment. Repeal all government agencies, except those necessary for foreign relations and defense, and make those former government workers find real jobs that produces stuff or services people with things that they actually want and need.

Say good bye to the wasteful United States Environmental Protection Agency. We need an new environmental paradigm. We need to get rid of our central planning model and trade it for something that works better.

We don't need those agencies to protect us. In the long run, they do more harm than good. For every person they favor with "help," they hurt more than one in the process.

Without the excessive regulatory state, we would have innovation again. More jobs. More advances in every field.

Our politicians lack the guts and the foresight.

Anthony Weiner (D-NY) has just completed ten days of lies and misleading half-truths. Yesterday, he admitted that he took the suggestive pictures and sent them to young women via tweet.

There was no prank.

His original and repeated denials of responsibility were false.

As in Watergate, it was not the original behavior (reprehensible, but essentially private), it is the cover-up.

I said I wouldn't, but I can't help myself.

More on the story from the New York Daily News.

Be sure to check out Biggovernment.com as the story trickles out.
at June 06, 2011 No comments:

I can't write any more on Weinergate, because I could never top the coverage by my brother, The Funeral Guy. Click on over to get the skinny on this pic: 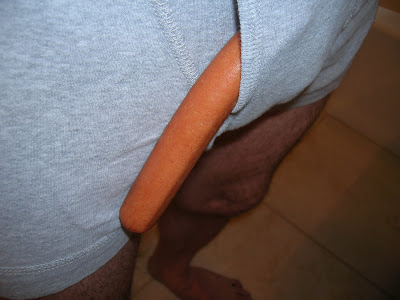 Alameda county rescue workers watched for an hour while a swimmer took his time drowning.

Cowardice rules in the People's Republic of California.

My Take on Weinergate

When congressman Anthony Weiner said, that he could not "say with certitude" whether the lewd picture twitted to a college girl was of him, Congressman Weiner effectively admitted that (1) it looks like his underwear; (2) he has taken pictures of himself turgid or someone has done it for him. Otherwise, he would absolutely know that the picture was not him.

Accordingly, guilty or innocent of that particular tweet, he knows he cannot absolutely deny that the picture was of him and effectively admits that it could be.

Furthermore, if his account was hacked or pranked, he should have immediately reported it to the FBI, which is easily done online. Or he could still do so. Why not? Because if he actually sent the tweet, the false report would be a crime.

To me the evidence on Weinergate is that the wiener in question is Weiner's.
at June 02, 2011 No comments: