"You Didn't Build That" Instant Replay

While it is not abundantly clear, I think the "You didn't build that," was awkwardly referring to a different antecedent: road and bridges.  When a good speaker uses a pronoun such as "that,"the antecedent is the closest preceding noun.  Barack Obama is not a good extemporaneous speaker.

Obama cannot conceive the reality that businesses succeed by, among other things, overcoming government hurdles.  Government drags down fledgling businesses.  Heavy regulation favors bigger, more established businesses who can afford the regulatory burden. The government is no friend to small business.

Government, especially the Federal government, tries, it seems, to block the success of small business.  Barry-the-socialist-at-heart lacks any understanding of that reality.

Boston Mayor Thomas Menino announced plans for the City of Boston to engage in blatant viewpoint and religious discrimination against Chick-fil-A, saying, "If they need licenses in [Boston], it will be very difficult -- unless they open up their policies."

He is not referring to any actual policies, but to the owners' Christian beliefs. The owners believe in traditional marriage. They believe in observing the Sabbath as a day of rest and worship. There is no evidence that Chick-fil-A has unlawful discrimination policies of any kind.

Congratulations to today's Moron of the Day for one of the dumbest ever public announcements threatening government violations of the First and Fourteenth Amendments to the United States Constitution. It is like giving money away, without the need for a welfare administration establishment. 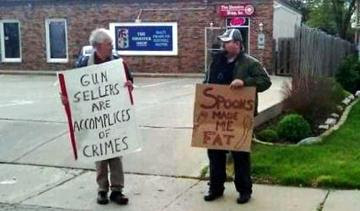 Government is the reason more entrepreneurs don't succeed. Ask any entrepreneur of a past failed business trying to get back on his or her feet, but are shackled by the obligation to pay payroll taxes, liability for which  never go away and is not dischargeable in bankruptcy.  It is forever a bondage to the tax man.
at July 19, 2012 No comments:

As presidential campaigns go, "President and his campaign have been as vicious and despicable as any campaign in recent memory"  says John Nolte.


Obama's campaign attacks success and seeks to bring forth in voters that cardinal sin: envy.  Romney fights back:

Moron of the Day: Eric Holder

Today's Moron of the Day is United States Attorney General Eric Holder.  Not for his behavior in Congress over Fast and Furious, bad as that was.  Not for withholding hundreds of thousand of page of documents while claiming that he was cooperating with the subpoena requiring them.  Not for asking the President Obama to claim executive privilege on documents that do not actually involve the White House (we think).

No.  Eric Holder wins the coveted Moron of the Day award for not being able to tell the difference between  poll taxes and laws requiring voters to have proof of identification.  Yes, he actually said that requiring voter identification is like a poll tax.  He did.  See here.  The nations chief law enforcement officer wants more lawlessness at the voting booth, by making it easier for non-citizens to vote.

The truth is that Democrats want non-citizens to be able to vote, because they think non-citizens would vote for ... here it is ... Democrats.

Congratulations to Eric Holder to winning our Moron of the Day award.
at July 11, 2012 No comments:

Email ThisBlogThis!Share to TwitterShare to FacebookShare to Pinterest
Labels: Holder, Moron of the Day

The Las Vegas Sun is reporting that the Erik Scott Family has filed a state court lawsuit against Cosco as a result of the shooting of Erik Scott July 10, 2010.  It is case no. Case No. A-12-663162-C.


In January, 2011, one of the officers involved in the shooting was charged with indicted for giving a weapon to the person under a disability, i.e., a convicted felon.  According to a news report, he had accepted a pea to a misdemeanor and had been fined $2000 in District Court.  In May 2011, he was indicted on another charge of giving a weapon to a person under a weapons disability.   Las Vegas Sun article here.   A later news article in December 2011 from the Las Vegas Sun says the trial was set then delayed.


Two of the other officers in the Erik Scott shooting have recieved national honors as police officers, according to CBS News Las Vegas.

Powerful: Vote for Our Children

Vote to protect our children's future:

As for the presidential race, one need not even mention the name of THE ONE who is FAILING our children.  It is obvious.
at July 11, 2012 No comments:

Email ThisBlogThis!Share to TwitterShare to FacebookShare to Pinterest
Labels: 2012 Election

Progressives: If You Think Conservatives are Evil, You Aren't Thinking

This is a message to the progressive left.  I understand you.  I understand that you think that America is a rich country (although no longer the richest in the world) and therefore, the rich in the country should share with the poor.  I get that concept.  How very noble.  (Well, actually, it is not so noble, unless you are one of the rich.)    Maybe it is well-intended..
News flash, conservatives and libertarians want the poor to get more money and have a path to wealth.
The problem is that while giveaway entitlement programs help with a small handout today, they inhibit the long term prospects for the poor.  Why?  It teaches the poor the wrong skills.  It teaches them how to demand more public freebies, but dies not teach them to become more productive.  Workfare was a step in the right direction, but even that has serious problems.  Workfare taught the poor how to get around workfare requirements.
No government handout program creates a path to self generated wealth.  And wealth can only be self generated.  There is not enough government money even conceivable that can make the poor wealthy through unearned gifts.
Conservatives and libertarians want the poor to have a real, achievable path to earned prosperity.
Do you really think that evil?  Do you really think that conservatives and libertarians want children to starve?  If you think that, you need to seek help.  Really.
The only path to legitimate prosperity is a mixture of hard work, ingenuity, focus, self discipline and some risk taking.  There is no legitimate path to prosperity by learning how to get more welfare benefits from government agencies.
If it is evil to want everyone to have an incentive to work hard and to gain a path to prosperity, and a disincentive to be on the public dole, then I plead guilty.

It is exactly Mr. Patrick's encouragement of the entitlement mentatlity that is destroying America from within. Here is a news flash for Governor Patrick: Americans should feel humiliated if they must accept public benefits to survive. I want them to accept them if they need them temporarily, but I also want them to have a strong incentive (like humiliation) to reject those benefits and become productive on their own.

Gov. Patrick's mindset has a 55 year history of creating a culture of dependency.

Governor Patrick's Moron of the Day award is truly well deserved.
at July 10, 2012 No comments:

The Democrats idea of bipartisanship consists of sitting on 290 bills passed by the Republican controlled House, The Hill reports.

In the abstract, failing to pass more laws seems like a good thing.  You never know.  A couple them might even do something good, like repeal stuff.  Obamacare would be a good start.

Just remember this when the Democrats inevitably accuse the Republicans of causing gridlock.
at July 01, 2012 No comments: