Behead Those Who Insult Islam 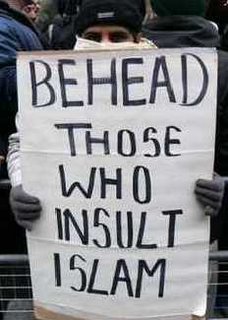 So, who is it that is insulting Islam today?

How about someone who commits violence to protest that suggestion that Islam teaches violence? I suggest to you that each Pope-rage rioter insults Islam. Behead them.

How about someone that riots over a cartoon image of Muhammed, which holds Islam up to world ridicule for the overreaction. Behead those rioters.

How about the many conspirators in the 9/11/01 attack that killed 3000 innocent people and persuaded most non-Muslims that Islam is indeed a religion that preaches violence, thus insulting Islam? I think we can all agree that those co-conspirators should be beheaded.

How about those purporting to act in the name of Islam urging death to someone who converts to Christianity, which is a horrendous overreaction to a personal decision? Behead those who insult Islam by urging death for apostasy.

How those who drive SUV’s into groups of innocent students (as at University of North Carolina) or who shoot up a Jewish center (Seattle) in the name of Islam, thus bringing Islam into disrepute? Behead those perpetrators. 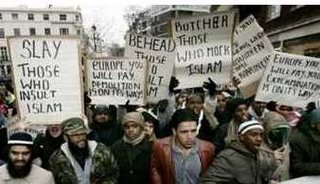 These guys are nuts.

In an obvious fit of woke delusional lunacy, the state of Washington has eliminated the word marijuana from the state codes on the grounds ...